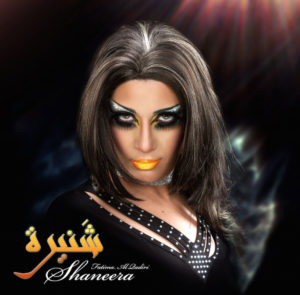 Shaneera is the English mispronunciation of the Arabic word, shanee’a (شنيعة), literally meaning “outrageous, nefarious, hideous, major and foul.”
In one iteration of the word, as queer slang used in Kuwait and some Arab countries – a positive and desirable light is shed on these attributes. Shaneera refers to a gender-defying persona (or temporary state or action), of being an evil queen. You know a Shaneera when you behold one.

The lyrics are suggestive, imploring, shady and loving, some original and some re-recorded material from Grindr chats, online drag and femme comedy skits. The language is a mixture of Kuwaiti and Egyptian Arabic, and one Iraqi proverb. Sonically, the record combines Khaleeji (Arab Gulf), Western drum kits and Arabesque melodies.

Shaneera the record lands somewhere in an undisclosed setting and is a love letter to evil and benevolent queens around the world.